Awhile back, the angel asked me to dedicate Sundays to the Gospel Readings for the day. With love and gratitude, here is the Gospel of Luke 5:1-11. With an angel guided message behind it.

While the crowd was pressing in on Jesus and listening
to the word of God,
he was standing by the Lake of Gennesaret.
He saw two boats there alongside the lake;
the fishermen had disembarked and were washing their nets.
Getting into one of the boats, the one belonging to Simon,
he asked him to put out a short distance from the shore.
Then he sat down and taught the crowds from the boat.
After he had finished speaking, he said to Simon,
“Put out into deep water and lower your nets for a catch.”
Simon said in reply,
“Master, we have worked hard all night and have caught nothing,
but at your command I will lower the nets.”
When they had done this, they caught a great number of fish
and their nets were tearing.
They signaled to their partners in the other boat
to come to help them.
They came and filled both boats
so that the boats were in danger of sinking.
When Simon Peter saw this, he fell at the knees of Jesus and said,
“Depart from me, Lord, for I am a sinful man.”
For astonishment at the catch of fish they had made seized him
and all those with him,
and likewise James and John, the sons of Zebedee,
who were partners of Simon.
Jesus said to Simon, “Do not be afraid;
from now on you will be catching men.”
When they brought their boats to the shore,
they left everything and followed him.

When Jesus entered the boat of Simon, the Holy Spirit revealed to Simon that Jesus was Lord.  Simon didn’t hesitate in trusting Jesus’ words. In fact , he lifted up his concern first , stating that they had been out all night but hadn’t caught a thing-but ended with “at your command, I will lower the nets”

Lifting up all concern, acting in faith and trusting Jesus, the Most High with God the Father produces miracles. God’s works are nothing to be compared to. Lifting up concern to God and Jesus is what they would like for us to do. Nothing is impossible to God and when you lift up concern with a sincere heart asking for God’s Assistance, you are going to receive the Highest possible blessing. God is abundant . Not only did he provide for their physical need , but Jesus went a step further and appointed Simon Apostle of Christ.  God answers prayers without hesitancy. In trusting him and the Lord, His favor is without measure for those who seek him, trust in Him and have faith in His Son 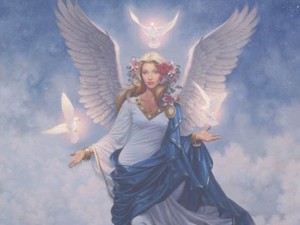 Uplift your heart to God every day, ask for His Love to overflow within you and within your family. God is happy to do so. God loves you very much and is holy, Divine and the Most High. God alone is sovereign and great is His Might. On this day, have faith in God to help you with your life, your choices, your outcomes. God is helping you and you and God are one with each other. TRUST in the Lord, KNOW He is working behind the scenes on your behalf. FEEL the Goodness of God in your heart. FOCUS on a positive outcome. THANK God for all His blessings and ASK for any guidance or action steps for you to take . Lift up all concerns to God always – knowing that God loves you and wants to help you and your family. You just need to allow God to help and ask for the highest possible outcome for you and your family. The easiest, most loving possible outcome can be obtained with ease. Just by asking God ( with a sincere heart) will help you and your family and more! God is abundant, he blesses abundantly, so when you ask, ask in faith , knowing that all things are possible with God and his son Jesus Christ- through the Holy Spirit- which is God given unto you- He can help you in a multitude of ways. You need only ask and He is your Heavenly Father- who wants to help you. Trust in God today- know your prayers are answered the moment they are received. Ask for Guidance if needed, Trust they are answered- and thank God daily for every good thing. Gratitude is important because God gives freely, without hesitation. He is generous and loving and kind- always. He loves you and so do we- the angels- and you are blessed. Peaceful blessings to all and so it is beloved- we thank you and are here to guide you always if asked.